At first glance, you might see a cybernetic or biotech creature of some kind. But Anshiri are harder to spot at the basic once over. A small chamber will be contained on the body somewhere, that holds the actual race itself.

Anshiri will look like a sea slug, about the same size and shape. (About a foot in size. They will come in various girths, colors styles and shapes.)

Generally it’s agreed upon that Anshiri tend to have six eyes with sideways pupils. This allows them to see a wider color spectrum then other species (Think Mantis Shrimp or Octopuses).

This being said, due to their origin they are never seen for very long outside of their bodies -- They need to be kept in that liquid chamber mostly to survive. IF they do become fused or ‘hooked up’ to their machines tend to look like they’ve melded to them -- Some kind of bio-engineering to their own bodies like mechanical turned to organic. With this type of ‘fusion’ of the parts they are able to regenerate much like a wounded human.

In a galaxy of bipedal and skeletal beings, as familiar to each other as they are dissimilar, the Anshiri as a species that by many are considered to be truly alien. In a strange union of the biomechanical and organic Anshiri are a race of peculiar invertebrates that reside in often humanoid exoskeletal platforms to which they use to interact with other species.

The closest analogue to an Anshiri would be a Terran jellyfish or mollusk, as the species evolved in the red-blue oceans of Europa where 100% of the moon is covered in water. They can move with ease and grace when submerged in a fluid environment. But when walking amongst land-based species they require the use of a special container or pod that is inserted in a uniquely build biomechanical suit. Said pods are constructed out of highly resistant materials due to how vulnerable they are otherwise.

A special trait of the Anshiri allow them to interface with their suits. Often appearing as amorphous blobs, they can manipulate their biological structure on even the atomic scale, linking cells and nerves to metal and circuits, allow direct control of their suits like extensions of their bodies. They can even use their own tissue to insight repairs to their suits like healing a natural wound to their own bodies. Of course they can only interface with machinery of Anshiri make, or extensively modified foreign machinery to support the alien. This blur between the mechanical and organic have led many to believe they were somehow engineered by an as of yet unknown race.

Their metamorphic capabilities mean that they amass great amounts of knowledge. Each Anshiri is essentially a gelatinous nervous system. Almost like a hive mind in an individual, pieces of the same Anshiri can still think and rationalize.

Anshiri are aggressively friendly, annoyingly so. They believe that everyone has a better side to them, and that no matter the past -- all can be trusted. In this aggressive friendship, it has made them easy to ‘abuse’ this trust from other races. They also strive to advance their technologies, and are far too curious about all the things around them.

Anshiri being one of the 3 advanced technology races that openly share with others. With this extension of assistance and sharing to other races, it’s helped to bring advanced technology to the races without. Bringing everyone up to a general level of standard. Anshiri’s primary technology is Biotech, which incorporates organic construction. Due to their own personal research they are now considered the most evolved race -- Also being the key to evolution for other races. Thusly making them one of the major targets for biology research.

Since their origin as a single cell organism in the near frozen waters on a few planets and moons, it makes their civilization structure complicated. Before evolution, they were nothing but single cell organisms in frozen water. Once they evolved into a higher way of living they started their nomadic discovery. They assembled into tight knit groups and scientific cultures. Once they became nomadic they never stayed in the same waters for too long.  As a nomadic group, they would follow behind and support their chief and advisers -- typically tending to follow them in their wanderings. Up until there was the establishment of a bio-mechanical city. It was considered a major travel hub, smaller living cities still continued to move and travel.

Since they were a nomadic species that was found on various planets and moons with bodies of water. They have no true government system, rather the stationary Anshiri have a diplomatic system. However nomadic Anshiri have a tribal system with a main Chief and two advisers.

Anshiri have an aggressive friendship with everyone, due to this they are dangerously trusting of other races.

'I welcome you friens Oui? How can Gaspar be helping you merveilleux people?'

'Our Origins? Hohoho Tha's a simple wone, we came from all ova, but we like Callin' Neptune our home mon cheris, nice an' cold out there near tha edge of tha system'

'Our par' in history, qu'est-ce que c'est, Is. . . complicated you coul' say, fo' a while we lived with the Shivan those won'erful people, but they always wan' to see wha' we made out of, Si pas fou'

'Then you those Verga'an, always wan'in us to be weapons, ain' wha' we wanna be doin' ya know, far too many thin's to learn abou' the universe, can' go dealin' with no war'

'Ooh Chil' the splicas and mutan's? We still tryin' to make 'em equal rights with all the other, how you say, Sentients? of this system, ain' no trouble to us none though'

*The interview ended but. . . none of the interviewers even remotely understood what he was going on about. . . they aren't even sure he shared any history*

"Our solar system.. A collection of impressive and large planets separated by vast, open gaps of space and balls of gases called Stars. Of the many curiosities of our dear solar system, over time we humans discovered water and vast frozen oceans on the many large round rocks orbiting our sun in the vast depths of space, utterly thrilled at the sheer.. Majesty of discovering the possibilities of sustaining life on these planets and moons, and the bacteria we found in these frozen pools left us boggling with imagination and intrigue."

"And then we found a bunch of intellectual blobs on the sea floor...

Hello and welcome to another pre-paid episode of The World and You.. Who thought of the name for this show? It barely makes any sense!.. Oh whatever...

'...Today we are discussing the intelligent.. Erm... Sea slugs... No we're not making this up I assure you. Called the Anshiri.. Oh it was about forty..Twenty years ago that we began orbital operations around Jupiter's moon Europa in an effort to colonize it at first for a research facility to study it's vast, frozen ocean before it was considered for civilian life. As the ice was mostly melting away from our efforts of driving super-heated plasma into it's surface while drawing up our plans to plant a cradle into the planet when a few pieces of research equipment were reported 'stolen' while operating out near the contact zone along with a few androids...

That's when we discovered.. Those things. They had fused with some of our equipment built to withstand the conditions of the environment, and attempted to hijack them into the depths of the ocean... The little shits*BEEP*

The Anshiri are a species of invertebrates evolved from the, who would of guessed it, bacteria in the waters of Europa. (Suck it, religion.) Ahem.. I meant to say, these creatures are often compared to the likeness of the common jellyfish or sea slug within the Earth's oceans.. Or whatever is left of them. The biology of these aliens allow them to fuse together with the mechanics of technology that is specifically suited for their genetic make up, thus they use various 'exo-suits' or types of cybernetic frames in order to travel and live on land and worlds outside of Europa's waters. They use these constructs to also speak and communicate with other sentient life.. When these suits are damaged, the creature is able to manipulate it's structure on a cellular level and repair their suits as if they were a healing wound on normal human beings..

Regardless of being a race of water slugs.. The Anshiri are quite remarkably intelligent beings with a passion for knowledge and learning in society. With the possibility of being great scientific minds, EarthGov has been actively recruiting these aliens for positions in various research departments with the most common sighting being on Europa's research installation built when we made contact with them in the beginning. I suppose I am comfortable with the little buggers running around but-"

[A digitalized voice that sounded like it's speaking underwater chimes in]

"Ah, good doctor, I see you are doing a segment about my species. Perhaps they would like to hear the story of when I climbed the Himalayas in search of the golden monks, or perhaps the time I was held captive in the jungles of the congo by the-"

"HOW IN THE HOLY FUHRER DID YOU GET IN THIS ROOM!?!"

"Oh.. Well, I saw that the door was jammed and the lock broken, so I took it upon myself to discover the codes through the locking mechanisms within the- "

"That door was suppose to be locked.. BECAUSE WE'RE DOING THIS SHOW!"

"Ohh... Oh dear me, my apologies I had thought it had malfunctioned. I suppose I shouldn't of also called maintenance in the process of making my way into the room."

"...Nevermind. This episode is done. I'm done. Screw everything."

[The sound of the doctor getting up from the table and walking away, boots clacking against the floor and the slam of the door behind them.]

"Doctor?.. Doctor Eisenstadt where are you going ole boy?..  Well, as I was saying it was a perilous journey into the congo jungles indeed but---*bzzzt* 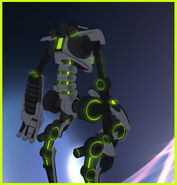 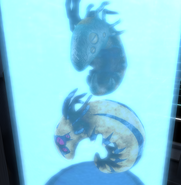 Retrieved from "https://remnantsofearth.fandom.com/wiki/Anshiri?oldid=8282"
Community content is available under CC-BY-SA unless otherwise noted.