These beings are the product of gene splicing, eugenics, and selective genetic engineering. Only within the last century and a half were they initially created. Created initially for war. These creatures are often times rather violent, or find great joy in the aforementioned violence. Often they are created to serve a specific purpose, or job, and will be tailored to best suit those jobs. War Splicers are bred for war, Labor splicers are made to do manual labor, and cosmetic splicers are bred for sex trades or nebulous purposes. This particular race is rarely seen among the middle class or higher and are often mistreated by society, widely considered as second class citizens or flat out banned from certain establishments.

A splicer of the two 'miscellaneous' races are the ones that look artificially made. Thus they tend to be more symmetrical or look more unique, this means their furs or skin tones or appearance tends to be FAR more various than their over all species. Such as unnatural hair or fur colors, or unnatural skin colors, or even mutations such as indigo crab claws.

Though no real personality can be pin-pointed they use to be a very efficient organic fighting force so were very orderly, but the war type Splicers now seen as pitiable abominations tend to seek refuge in hidden locations so as not to feel like they will be hunted down. Despite this 'cosmetic splicers' tend to be far more arrogant and vain since they got what they asked for usually.

History, Society, and Influence in the Solar System

Splicers have little to no society, instead they live among society, usually in service to it. Splicers were created for their particular purpose, and then to simply die. They are often mistreated, beaten, or used for some type of labor or task. Often times, Splicers will revolt against their masters, leading to many splicers being thrown into exile, or hunted.

Splicers were originally created to fight during the Resource War. War Splicers played a massive role in the war, being used to bolster numbers for the Human military, who was losing the battle at the time. They were selectively bred to have a fierce loyalty to their masters and made a massive difference, turning the tides of war. Once the war was over, they were abandoned or exterminated. Some felt betrayed, others escaped. Some were even dumped on Earth to live out their days, which were already genetically numbered to be short. Humanity did not want these dangerous splicers to outlive themselves.

Splicers are one of two races treated with very little respect over all, but are usually pitied, although splicers usually respond apathetically, uncaring and uninterested.

'It's ok that I'm here right? This is where the interview is being held? It is? Alright well what do you want to know? If I can help it I would rather not be here longer than I need to be'

'Splicer history? It's pretty short but if your fine with that, that's easy enough to explain'

'Well as some of the older humans know most of us were made using Shivan and Anshiri science to make living weapons so they wouldn't use their own people, of course that didn't work quite as planned seeing as most Splicers back in the day were Humans and later on everything else.'

'At first it was all for Earth, that was what a lot of us believed, this war is meant to take back Earth and fix it. . . but the war didn't end there, it was after we were forced to fight the Shivan and force them out of their home that we realized something was wrong'

'But we couldn't argue much, we knew what we signed up for. . . we didn't know what would happen to us 'after' the Solar war, a lot of us were disposed of, it was a horrible sight, so we had to fight back now and again, but ultimately there was enough peace to go around.'

'Just not a lot of work for living weapons, and the only splicers that didn't get the 'weapon' treatment, were the ones that 'intentionally' got spliced.'

'There, Splicer history that everyone knows, are we done?'

*The interview to the surprise of the interviewers ended rather easily, no attacks, no escorts, just payment, straight forward answers, and calm conversations*

"Oh.. It's you again. Well I certainly hope your day has been particularly enjoyable as we are now going to be discussing another fun filled episode of the world and you..

Today we will be going over a rather interesting minority of people all unique in their own ways, the Splicers are humanoids genetically altered to differ from the average human being in society. Now you may be asking just -how- these beings came into existence.. Well, it's quite simple really you need only to look into the name of their origin. A Splicer would imply that it is a human being that was genetically spliced through some means, mostly of the scientific variety, resulting in an abnormal collection traits inherited through the DNA that was involved in such a process..

..In, layman terms since I can only imagine most of you have no clue what these words means, some people through some way or another became a human being with animal like features or various subtle mutations. I believe the Japanese were likely at fault for this one..

Splicers may seem rather harmless, modified humans but like all.. Great? Innovations in science there is always the dark, creepy underbelly.. Some splicers are spliced to the point of becoming mutated hybrid monsters of various traits, whereas another type of splicer are human beings who have abused this science resulting in them becoming a mass of contorted flesh and limbs indistinguishable to modern society.

Even worse however, is the splicers that are made for biological weapons programs designed to create 'super soldiers' in order to counter todays problems  with the wonder that is black market science combined with genetic research, creating feral human beings that usually lack most of their original sentience.. One such example in our records would be the case of a very unique child that was raised and groomed to become the violent and unstable monster he is today..

..Well, this has been another exciting segment today. Now if you excuse me I have to go clean up this mess before the other employee's discover the gruesome 'redecorating' job -he- did.." 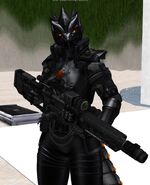 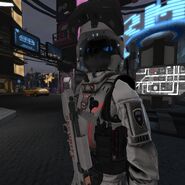 Add a photo to this gallery
Retrieved from "https://remnantsofearth.fandom.com/wiki/Splicer?oldid=9219"
Community content is available under CC-BY-SA unless otherwise noted.