At first glance one of these particular types are boastful, arrogant, stubborn and proud. And it's for good reason! Being one of the elder races. They are deeply seated in the background histories of most--the reason that other races have learned to fight, understand religion and believe in a war based technology and order. A Verga'an enjoys in the simplistic nature of violence, typically a go to greeting is a punch in the face. If you get socked in the arm or the back, it's to mean that they are typically joking around with -- even making fun of. However that being said, a punch to the gut is usually stating that they are disappointed in you. A big sign of brotherhood is a punch in full contact with another fist. However don't be getting punched in the neck by these short creatures-- As this is a challenge to the death.

A Verga'an will be of short, stocky and muscular build. Human colored skin-tones. They fashion their hair into braided appearance that come in blond, black, brown, red and white. A Verga'an will be very intimidating despite their sizes and tend to look as though they have always been pulled away from working on something (Mines, on their warp gates or other Verga'an technology.)

On their body they have displayed tattoo's that signify their house, and being a extremely partial to violence in their nature -- will sport their scars with pride.

A verga'an beard is glory to hold, as they wear their beards with as much pride as the story of scars upon their body. They say nothing is quite as magnificent as a Verga'an beard.

It was said at one point the race lived on a planet sized kingdom that reached out into deep parts of space and visiting other systems. And for many years that was well worth it for the Verga'an, but some decided being a little more stationary was more important. So those not on their planetary kingdom of Asgard decided to split off from said kingdom and dig deep into the Earth. Very little is known about civilization on their home planet short of it being super advanced, but much more is known about Earth Dwarven culture. Those living in the mines tend to have an affiliation for finding gold, valuable gems, and minerals, in fact for a long time they embraced a more barbaric style of living at points despite how advanced they are. Claiming it was a- -'refreshing new beginning'. That being said if one ever came across the mines they would be watched 24/7 in case of thieves, attempts at their lives and so on. They have a harsh judge system for those that break their laws, governed by a group called the “Valkyries” and a King named “Odin”.

Verga'an are extremely solitary people, most tending to live in the mines -- they thrive in the dark cavernous regions which ends up being a kingdom all of it's own. A mine will have a King or a Queen, but oddly enough it will never be both. It seems that whomever is dominant within that kingdom will call all of the shots. They are proud of all of their strengths and achievements.

Below the King or Queen of the kingdom, there's 5 sanctions of Verga'an groups:

These sanctions of Verga'an groups fall within a caste system. This is a form of social structuring that's characterized by the hereditary transmission of their own rules and beliefs.

An oath is an important thing to the Verga'an. Oaths are to be kept, not broken, and if a Verga'an swears an oath they condemn themselves should they fail to uphold it. Verga'an rarely take an oath, and as such it's an incredibly rare thing for one of the stalwart people to do.

With this in mind, there are Verga'an who uphold their oaths in the most incredible ways. These Verga'an are known simply as 'Fyrirmynd' or 'Model' in English. For a race of craftsmen, this is the highest honor. To be something that all Verga'an strive to be, and to be a living embodiment of the race's values and ideals. King Austri is the perfect example of a fyrirmynd, having lived since the first interactions with the human race and justly ruling the people the entire time.

The last time they were on Earth, they visited the Nordic lands. They had a heavy hand in influencing the local populace in history. Considered 'Dwarves' in history and their advanced technology as 'Gods'. They spread tales of their world and other adventures to humans, which became a heavy basis for Norse Mythology. Verga'an eventually left the humans to their own demise after being so seated in their mythology.

They had a hand in forcing pacts in many major Mining Corporations. They would leave behind five Verga'an overseeing and working the mines, and sending 20% of the finds to Verga'an culture in these mining pacts. This maintained a certain level of balance within Verga'an favor among agreements and other races.

Verga'an tend to be hostile toward every race save maybe Humans and Shivans out of certain levels of respect. They are Especially hostile toward Drevii.

'Aye I hearr you'rre wantin' an interrview with me an' mah kin, welll ye came to the rright Verrga'an, 'fore I'm the best therre's everr been!'

'That's big talk fer a panzy in a skirrt Angus!'

'SHUT-IT PANZY! Trryin' to educate these childrren! So as I was saying we once came frrom V113 but since left that place forr a morre stationarry place we could call home and just dig all day and build things.'

'Planet was a nut-house! Nothing but fighting, which I miss but it got old so fast!'

'Aye but a Dwarf can drream!'

'Aye nothin' wrrong with drream, but we can enough action herre on Earth!'

'And then some, swearr those grreen skins that keep trryin' to get into our mines neverr seems to end! And I could only ask forr morre!'

'Aye, those Dwarrves on V113 visit now and again, but they tend to keep to themselves these days, so the ones that stayed on Earrth like yourrs trruly'

'I carre, and I carre to make a point of it with you and yourr FACE with my FIST!'

'Aye that's it, interrview overr, I've got to settle something!'

*The interview ended with the building collapsing from two verga'an fighting over some small dispute which you never quite understood. . . you don't think you really learned anything either.*

Any artwork here does not belong to RoE, and is here only for reference and supplemental materials only. 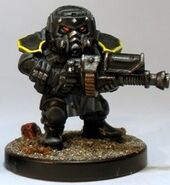 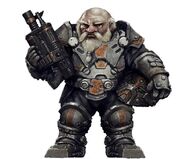 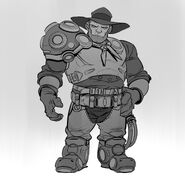 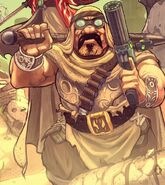 Add a photo to this gallery
Retrieved from "https://remnantsofearth.fandom.com/wiki/Verga%27an?oldid=8436"
Community content is available under CC-BY-SA unless otherwise noted.